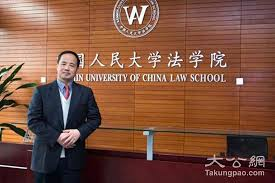 Updated 1/8/21
Personal rights in China's new civil code - Wang Liming, et al - MODERN CHINA
Wang Liming, perhaps China's most prominent torts scholar and a major figure in academic circles, has with his Renmin University colleague Xiong Bingwan published in Sage's MODERN CHINA journal a lengthy discussion of the novel "personal rights" 人格权 section of the landmark Civil Code which takes effect January 1.
The section - of which we will soon publish a translation - is a real contribution to China's developing civil law.  It embeds in basic law personal rights to life, bodily integrity, personal security from unlawful searches, personal and organizational names, health, reputation, and privacy.  It bars commercialization of organ donation while preserving the voluntary right.  Remarkably it establishes a right to be free from sexual harassment - a right the Supreme People's Court last year recognized.  But its location in the nation's first comprehensive civil code highlights and secures the principle.
The new section makes significant changes in the Law on the Protection of Women's Rights and Interests.  (2005)  That law (presumably superseded) provided "Article 40 Sexual harassment of women is prohibited.  The woman victim has the right to complain to the relevant unit or government agency."

Unlike the earlier law Article 1010 of the new civil code (below) is not gender specific. And rather than the right to complain, it establishes the right to demand civil responsibility. The new Code provision makes clear that the objectionable harassment may be by words, images, physical conduct, et cetera. It further compels entities and agencies to take precautions, to not only accept but hear complaints, investigate, and use their powers to both guard against and stop such harassment.

The Code language is broad enough to support harassment claims by men, and to be interpreted liberally to protect homosexuals, lesbians, etc.  But Susan Finder has pointed me to comments by Darius Longarino at China Law Translate arguing that narrow interpretation of the sexual harassment Article and problems of proof may make it of limited impact.  Yale Paul Tsai China Center's Longarino has elaborated this view in a new post.  We, of course, have seen that judges have shown varying receptivity to the principle in the U.S.  For example Amy Coney Barrett, newly placed on the Supreme Court, expressed a narrow view close to that of Wang Liming regarding what constitutes workplace harassment.
Finder explains that the Supreme People's Court plans in 2021 to present guidance documents on the causes of action recognized in the new Civil Code which replaces many laws such as the 2009 Tort Law 侵权责任法.

Article 1010 Where sexual harassment is committed against the will of another person by words, images or physical acts, et cetera the victim shall have the right to demand the actor bear civil responsibility according to law.

A government office, business, school, and other such unit must take reasonable precautions, accept and hear complaints, investigate, process and use the powers of the office to  to guard against and stop acts of sexual harassment of subordinates.

Article 1011 If one unlawfully detains or otherwise limits another's free movement or unlawfully searches another's body[person], the victim has the right according to law to demand the actor bear civil responsibility.