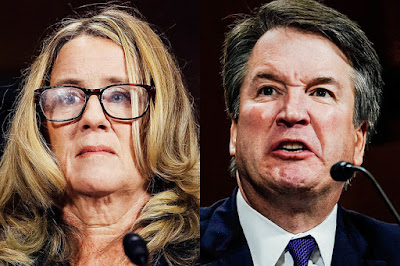 The Kavanaugh hearing and angry men.

Thursday’s judiciary committee hearing was a study in contrasts whose differences were oddly erased by their result. Christine Blasey Ford seemed terrified but brimmed with good will. The extent of her cooperation is measurable: She went to great lengths to be as painfully precise as she could be, clarifying her comments at every turn. She was considerate of the committee and answered every question, repeatedly going out of her way to offer more than was asked. Her effort to comply under difficult circumstances was unrelenting, even as she downplayed the negative effects of all this on herself and her family. (Asked how her husband and children were doing, she said they were basically “OK.”) She came across as dedicated, responsible, and motivated by a sincere desire to help.
She was called credible by most observers.
Brett Kavanaugh launched his half of the proceedings without an iota of graciousness or respect for the body charged with advancing his confirmation. He began yelling his grievances at the committee. Though this may have been intended in part to be strategic, his demeanor quickly careened away from controlled chaos to just chaos as he attacked the committee’s Democrats in a hissing second person, his mouth curled in a sneer of contempt: “You have tried hard. You’ve given it your all. No one can question your efforts. Your coordinated and well-funded efforts to destroy my good name and destroy my family will not drag me out.” He used phrases like lying in wait. Take me out. So shocking was it to see a judge abandon reason and decorum in order to lob accusations and float conspiracies—at Americans whose offense was requesting that a serious charge against him be investigated—that many watching thought he must be about to withdraw from consideration. But no. He did not admit defeat in a blaze of glory. He denied, he attacked, and he obstructed, all the while making himself the victim of a proceeding he would later repeatedly claim to respect.
Posted by George Conk at 11:00 PM No comments:

How Rod Rosenstein Protects the Mueller Investigation - Lawfare
by Susan Hennessy and Benjamin Wittes
Unless something changes again in the mercurial mind of Donald Trump, it looks like Rod Rosenstein will survive the day. He survived last Friday, Sept. 21, when the New York Times published a report that he had raised the possibility of wearing a wire in the White House and had discussed invoking the 25th Amendment against the president. He survived Monday, Sept. 24, amidst warring press reports about whether he would resign or be fired. And then he was scheduled to meet with President Trump on Thursday, Sept. 27—the same Thursday that Supreme Court nominee Brett Kavanaugh will face the Senate Judiciary Committee—raising expectations once again that the deputy attorney general would be making his exit. But Wednesday evening, Trump appeared to be having second thoughts......KEEP READING
Posted by George Conk at 8:25 PM No comments:

HOW DARE YOU?!HOW DARE YOU DO THIS TO BRETT KAVANAUGH?HOW DARE YOU DENY HIM THIS SEAT?!
Listen, NO, YOU listen!Do you know who Brett Kavanaugh is? Brett Kavanaugh went to Georgetown Prep!BRETT KAVANAUGH IS AN OPTIMIST WHO LOOKS ON THE SUNSHINE SIDE OF THE MOUNTAIN!BRETT KAVANAUGH IS NOT YELLING!YOU’RE YELLING!
If Brett does not secure a lifetime appointment on the Supreme Court, this country will be IN SHAMBLES! THIS IS HIS BIRTHRIGHT! Do you know how embarrassing it is for a Georgetown Prep graduate to NOT be on the Supreme Court? They are literally 12 PERCENT of the court! THIS IS PROBABLY THE WORST INDIGNITY YOU CAN INFLICT ON A HUMAN BEING!
ALL BRETT IS ASKING FOR IS DUE PROCESS! DUE PROCESS BEFORE HE IS DEPRIVED OF HIS GOD-GIVEN RIGHT TO A SEAT ON THE HIGHEST COURT IN THE LAND, WHERE HE WILL DETERMINE THE FATES OF MILLIONS!
Apply the standard you want to apply to your husband-brother-son. He should be allowed to be careless. He should be allowed to like beer.BRETT LIKES BEER!WHO DOESN’T LIKE BEER!BRETT ISN’T YELLING!YOU’RE YELLING!THIS IS A CON JOB!THIS IS A FARCE!YOU SHOULD BE ASHAMED!THIS IS BRETT’S SEAT!


The Founders did not break from Britain so a landed white gentleman accused of sexual misconduct could NOT be given FREE REIN over the lives of millions!
Posted by George Conk at 1:30 PM No comments:

This whole two-week effort has been a calculated and orchestrated political hit, fueled with apparent pent-up anger about President Trump and the 2016 election. Fear that has been unfairly stoked about my judicial record. Revenge on behalf of the Clintons. and millions of dollars in money from outside left-wing opposition groups.
This is a circus. The consequences will extend long past my nomination. The consequences will be with us for decades. This grotesque and coordinated character assassination will dissuade competent and good people of all political persuasions, from serving our country.
Posted by George Conk at 11:21 AM No comments:

Revenge on behalf of the Clintons - Brett Kavanaugh

Am I still required to tell students that the judges of the U.S. Supreme Court are engaged in an honest search for intellectual consistency in their decision making?

The rage Judge Kavanaugh displayed, apart from its bearing on his judicial temperament, exposed the dark side of a guy who seemed fully capable of getting sloshed, doing exactly what Dr. Ford described, laughing as he did it, and barely remembering the next day what he had done.
— Laurence Tribe (@tribelaw) September 27, 2018

It's painful to admit this because we prided ourselves on the most prestigious alumni of our high school - Brooklyn Prep. John Sexton, Dean of NYU Law then transformational President of the university, and Penn State coach Joe Paterno - who still read Latin and whose athletes excelled. We were addressed as Mister from the first and were expected to become leaders of the Catholic community. But the flip side of that was a sense of male entitlement that could be oblivious of women except those seen as on a pedestal. - gwc
Improper Formation? | Commonweal Magazine
by John Gehring
***If you’re an outsider to Catholicism and want to understand hierarchy, clericalism, and power, think about the culture of Penn State football under one-time patriarch Joe Paterno. His top assistant abused boys for years, and while court documents show that Paterno knew about the abuse, the church that is Penn State football had to be protected. The institution was sacrosanct. A culture of secrecy and patriarchy guarded a privileged class.

Whether Kavanaugh gets confirmed or not, this dramatic moment in Washington has offered a window into those ecosystems where some young Catholic men of privilege are formed. We should affirm the best of the culture surrounding rarefied places like Georgetown Prep that serve as pipelines to power in the same way we affirm the best of our church institutions. But while we affirm and preserve, there also needs to be a willingness to fearlessly confront the toxic aspects of cultures and institutions that shape our future senators, supreme court justices, and bishops. If the old systems and institutions prove incapable of learning from failure and of reforming, it’s time to build something new on those ashes.
Posted by George Conk at 11:25 AM No comments:

Kavanaugh, Christine Blasey Ford, and the World of 1982 - The Atlantic

Caitlin Flanagan nails it: the world of Brett Kavanaugh's youth.
She fleshes out his appalling Georgetown Prep yearbook page.
BTW - as one who was educated by Jesuits at Brooklyn Prep and Holy Cross College -  the Georgetown jock frat boy culture was well known when I was in high school and college in the early to mid sixties. - gwc
Kavanaugh, Christine Blasey Ford, and the World of 1982 - The Atlantic
by Caitlin Flanagan
Posted by George Conk at 12:10 AM No comments:

The Mass Psychology of Trumpism « LRB blog
by Eli Zaretsky

***One might object that Trump, a billionaire TV star, does not resemble his followers. But this misses the powerful intimacy that he establishes with them, at rallies, on TV and on Twitter. Part of his malicious genius lies in his ability to forge a bond with people who are otherwise excluded from the world to which he belongs. Even as he cast Hillary Clinton as the tool of international finance, he said:

I do deals – big deals – all the time. I know and work with all the toughest operators in the world of high-stakes global finance. These are hard-driving, vicious cut-throat financial killers, the kind of people who leave blood all over the boardroom table and fight to the bitter end to gain maximum advantage.

With these words he brought his followers into the boardroom with him and encouraged them to take part in a shared, cynical exposure of the soiled motives and practices that lie behind wealth. His role in the Birther movement, the prelude to his successful presidential campaign, was not only racist, but also showed that he was at home with the most ignorant, benighted, prejudiced people in America. Who else but a complete loser would engage in Birtherism, so far from the Hollywood, Silicon Valley and Harvard aura that elevated Obama, but also distanced him from the masses?
The consistent derogation of Trump in the New York Times or on MSNBC may be helpful in keeping the resistance fired up, but it is counterproductive when it comes to breaking down the Trump coalition. His followers take every attack on their leader as an attack on them. ‘The fascist leader’s startling symptoms of inferiority’, Adorno wrote, ‘his resemblance to ham actors and asocial psychopaths’, facilitates the identification, which is the basis of the ideal. On the Access Hollywood tape, which was widely assumed would finish him, Trump was giving voice to a common enough daydream, but with ‘greater force’ and greater ‘freedom of libido’ than his followers allow themselves. And he was bolstering the narcissism of the women who support him, too, by describing himself as helpless in the grip of his desires for them.***
Posted by George Conk at 11:40 AM No comments:

Kavanaugh's year book page is the script for his cross examination

The script for cross examining Kavanaugh is laid out in his yearbook page.
Jock.

The Plot to Subvert an Election: Unraveling the Russia Story So Far - The New York Times

Check out @tucker_shaw’s Tweet: https://twitter.com/tucker_shaw/status/1041839498999603202?s=09
I print the whole thread below - but you need to click through to Twitter to see the many emotionally powerful comments. - gwc
by Tucker Shaw

@tucker_shaw
I overheard a young man on the train on the way home today, talking to another young man. Holding hands. In college, I guessed. About that age anyway. Much younger than I am.
5:01 PM - 17 Sep 2018

Posted by George Conk at 7:47 PM No comments: