On Our First Juneteenth - the national holiday 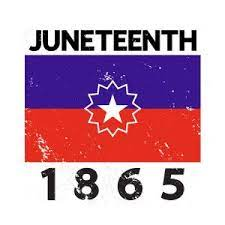 On the first Juneteenth - our national holiday
On January 1, 1863 the Emancipation Proclamation went into effect. Eleven months later on November 19 at the Gettysburg battleground Lincoln dedicated the Union lives lost to the vindication of the promise of life, liberty and the pursuit of happiness made four score and seven years before. But the war continued.
Two and half years later on June 19, 1865 Union Army General George Granger declared that the quarter million slaves in Texas were now free.
Congress had on January 31st passed the 13th Amendment: "Neither slavery nor involuntary servitude, except as a punishment for crime whereof the party shall have been duly convicted, shall exist within the United States”. Ratified on December 6, 1865, the 13th was soon followed by the 14th and 15th Amendments promising equal protection and the right to vote regardless of race.
Although those events were a second founding, none of those dates has been embedded in the nation’s consciousness like Independence Day has been.
But African Americans in Texas have long celebrated `Juneteenth’. Now we all will. After a year of plague, conflict, and even insurrection, as the country re-emerges we now have a hoped for moment of unity.
Last Wednesday the House of Representatives voted 415-14, joined by a unanimous Senate to declare Juneteenth a new national holiday - promptly celebrated on Saturday after gaining the signature of President Joseph R. Biden. We hope everyone had a peaceful and reassuring first Juneteenth. We wish ourselves and the country many more.
- GWC June 17, 2021
Posted by George Conk at 11:03 PM