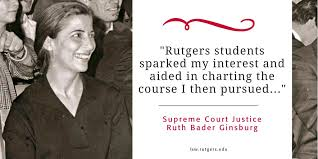 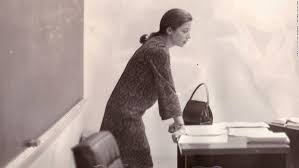 I started law school fifty years ago at Rutgers-Newark which we called, light-heartedly, the People's Electric Law School.   Ruth was the first woman to teach a course on women and the law.  There were no women's rights journals, no law review articles, no books to assign.  So she started from scratch.  My law partner Eileen recalls that the first book she assigned was Simone de Beauvoir's The Second Sex.

She quickly began to fill the gaps.  We soon had the Women's Rights Law Reporter, and the women's rights litigation clinic led by the extraordinarily powerful professor Nadine Taub, only the third woman to join the faculty of the famously progressive law school.

I remember being in Ruth's civil procedure class, where she stood at the desk with her purse and her papers.  She had not yet argued a case in court.  Neal Katyal just called her the Thurgood Marshall of women's rights.  Truer words...Though she was a novice Ruth laid out her strategy - to make gender distinctions in the law a "suspect classification" which, like race, was to be viewed skeptically by reviewing courts.   Then she proceeded to accomplish that - by casting her vote on the Supreme Court and writing the majority opinion in the VMI case to admit the first woman to the state military college.

She embedded her views in her 1996 opinion in United States v. Virginia. Ginsburg wrote "generalizations about 'the way women are,' estimates of what is appropriate for most women, no longer justify denying opportunity to women whose talent and capacity place them outside the average description."

We were learning at the feet of an emerging giant.  I count that among the luckiest moments of my life.  - GWC