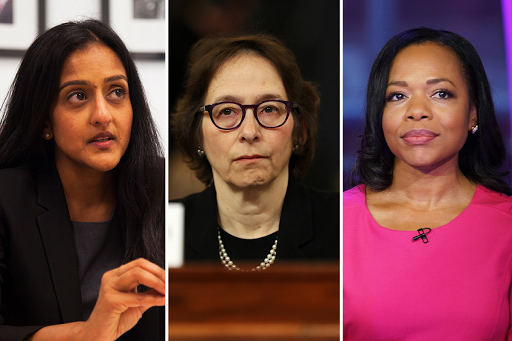 President Biden has chosen for top positions at the Justice Department three advocates who have spent their lifetimes in the civil rights arena and the last four years in particular combatting the Trump-era’s most egregious assaults on democracy.

When then-President Trump put forward judicial nominees who had shown hostility to voting rights, Vanita Gupta organized the civil rights community pushback that helped sink the confirmations of at least two of them.

When the administration stood up a sketchy “election integrity” commission to validate Trump’s false voter fraud claims, Kristen Clarke spearheaded one of the early legal challenges that contributed to the panel’s eventual demise.

And when Trump hijacked the U.S. foreign policy apparatus to smear his 2020 presidential opponent, Pamela Karlan testified in House impeachment proceedings about the implications that gambit had for democracy.

Now all three have been selected for key DOJ positions from which they can revitalize the department’s role in the voting rights space — at a time when the threats to democratic participation are historically daunting.

Not only do they bring a complementary set of skills and experience that Judge Merrick Garland himself hailed in his attorney general confirmation hearing last week. All three did previous stints at the Department of Justice that will allow them to hit the ground running. And in this environment, the Biden administration will have no time to spare: the department will be facing an onslaught of restrictive voting laws, a historically challenging redistricting cycle, and a legal minefield with the Trump-ification of the federal judiciary.

“These are hard positions to be in,” said Allison Riggs, who leads the voting rights program at the Southern Coalition for Social Justice. “They will be aggressive advocates, and I think they will use their enforcement authority more than they have in the past.”

Already at the Justice Department because she was selected for a top civil rights division position that doesn’t require Senate confirmation, Karlan has signaled the beginning of a new era by rescinding the department’s bogus Trump-era request for census citizenship data. The move put the final nail in the coffin of that administration’s plan to weaponize the data against immigrant political power. Clarke will supervise the division if she is confirmed its assistant attorney general. Gupta, who occupied Karlan’s role during the final years of the Obama presidency, has been nominated for associate attorney general, the number three leadership position where she is expected to oversee not just DOJ civil rights work but several other department divisions.