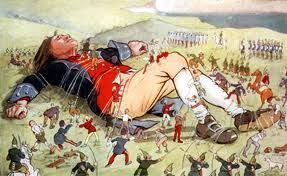 The rhetoric of judicial impartiality, of non-partisanship, of separation of powers dominates the language of judges - and of lawyers and acolytes in the press and halls of power.  It is rarely acknowledged that the attractions of power drive judges at least as much as they do elected politicians and the administrative agencies so often disparaged as bureaucracies.

The rhetorical strategy of judges and the lawyers who work in their ambit buries that fact in the language of non-partisanship, rule of law, separation of powers and constitutionalism.  So the recent rulings of the Supreme Court in the Trump tax record cases Trump v. Vance, District Attorney and Trump v. Mazars and Oversight Committee were treated as victories for rule of law over the disgraced now former President.  Some, like Vox's Ian Millhiser, saw the decisions as wins for Trump who would not suffer the embarrassment of pre-election disclosure of his dubious tax returns.

The strings attached to the decisions have to this day prevented disclosure of the former President's shady finances.  That was accomplished by the strings attached by the Supreme Court in both Trump v. Vance and Trump v. Mazars- the decision regarding subpoenas by three congressional committees.  Despite the high rhetoric none was a clean win for disclosure.  Trump's financial records remain in his accountants hands.

Beneath Chief Justice John Roberts exalted language and judicial Olympianism lies diminution of both President and legislators as competitors for power, a venality in which judges take no part. Roberts warns that legislators may seek to tie down the President like Gulliver by the Lilliputians:

The interbranch conflict here does not vanish simply because the subpoenas seek personal papers or because the President sued in his personal capacity. The President is the only person who alone composes a branch of government. As a result, there is not always a clear line between his personal and official affairs. “The interest of the man” is often “connected with the constitutional rights of the place.” The Federalist No. 51, at 349. Given the close connection between the Office of the President and its occupant, congressional demands for the President’s papers can implicate the relationship between the branches regardless whether those papers are personal or official. Either way, a demand may aim to harass the President or render him “complaisan[t] to the humors of the Legislature.”  [emph. added -gwc]

Chief  Justice Roberts's Opinion of the Court ends with a dense three page litany of concerns for courts to scrutinize rather than complaisantly allow the elected representatives of the people to decide what they need from Donald Trump's financial records.  The Lilliputian legislators will have to dunk through judicial hoops before they can obtain the information they seek for legislative purposes.

My skepticism about this judicial arrogation of power to vet the elected legislators has been confined to blog posts and discussion questions for my Remedies students.  So I was delighted today to see that Georgetown's Josh Chafetz has gone the full length of the court to compare the courts' actions in Watergate (reserving the high ground for judges while stalling the legislators) with those in the Trump cases where the Supreme Court has raised high the mugs of judicial mead while withholding the performance of their mandates.

​Chafetz's forthcoming Strategies of Judicial Aggrandizement is a rare treatment of the courts the way others are treated.  We are accustomed to the charge that bureaucracies try to increase their power, that legislatures overreach, and that Presidents tend toward the imperial (thank you Arthur Schlesinger, Jr.).  But rarely does "judicial aggrandizement" get any attention.  I had predicted that the Trump v. Mazars case would yield a minimal remand along the lines of  warning of the dangers of a bill of attainder.  But the  broad inquiry into Congressional purpose prescribed by Roberts is explored carefully by Chafetz.
As often happens the delight comes from the apparent simplicity of historical narrative.  The key is which facts do you choose to compare?  Chafetz details  two chronologies of courts and Presidents - Trump and Nixon.  His narrative - both enlightening and accessible - demonstrates judicial elevation and legislative disparagement as a unifying theme.  The judiciary, like the other two branches, contend for power and seek to expand their terrain.
We would be much better off if we stopped talking about separation of powers and talked about overlapping and competing powers among the branches, the states and national government, and, god forbid, the electorate.  The Chafetz essay - written with an historian's hand and a journalist's clarity - is a relief to read  - unlike the much too common heavy hand of academic theory  that somehow leaves you farther from the facts rather than closer to the ground.  - GWC​

In Trump v. Vance and Trump v. Mazars, the Supreme Court applied very different standards for subpoenas issued for the personal papers of the President, making it easier for a grand jury to acquire such materials than a congressional committee. The two opinions, both authored by Chief Justice Roberts, have been widely praised for suggesting that the president is not wholly above the law; indeed, they have been treated as the second coming of the Nixon Tapes Case.This Essay argues that while the Trump subpoena cases do have an important kinship with the cases concerning access to White House tapes during Watergate, this similarity is not quite as flattering as commentators imagine. What the cases surrounding access to Donald Trump’s financial records and the cases surrounding access to Richard Nixon’s White House tapes have in common above all else is a project of judicial self-empowerment at Congress’s expense. What distinguishes them, on the other hand, is the immediate result of the two sets of cases: whereas the Nixon Court acted to push a lawless president out of office, the Trump Court acted to ensure that the information sought by other institutional actors could not have electoral consequences for another lawless president.